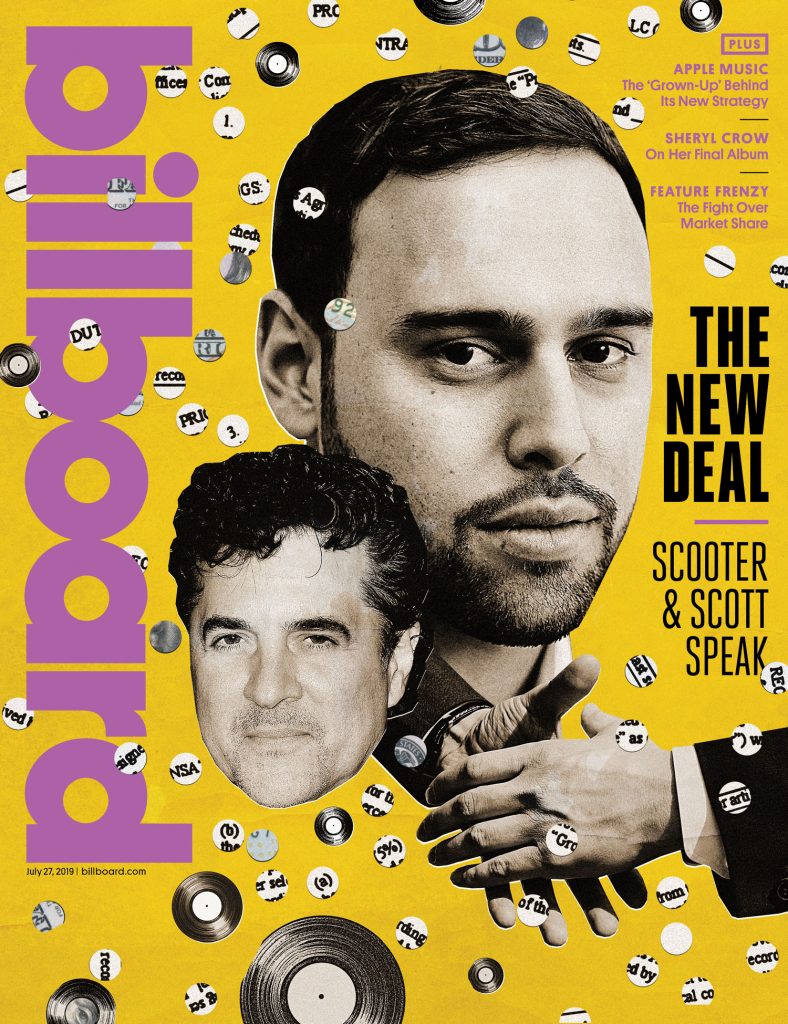 In June 2010, Justin Bieber, then a 16-year-old boy wonder, opened the Foxborough, Mass., show on Taylor Swift’s Fearless tour, along with two other acts. That same evening, Scooter Braun, who had discovered Bieber on YouTube and signed him to a management deal three years earlier, first met Scott Borchetta — who in 2005 had signed a 15-year-old Swift to his then-new label, Big Machine.

“Our stories were similar,” recalls Braun on a recent afternoon, speaking by phone from his office in Santa Monica, Calif. “Everyone at Big Machine — Taylor was kind, Scott was kind — everyone was kind to me and Justin when we were doing that show, and you don’t forget those things. I never forgot that, and we started a friendship.”

On June 30, that friendship turned into a blockbuster business partnership: Braun’s Ithaca Holdings acquired Big Machine Label Group and its publishing unit for just over $300 million in a deal backed by The Carlyle Group, a private equity firm that took its first stake in Ithaca in 2017. This time, Swift wasn’t as kind, writing in a Tumblr post that she was “sad and grossed out” by the news that her musical legacy would lie in Braun’s hands, unleashing a social media uproar that ultimately involved stars from Halsey to Bieber himself.

In the first interview Scooter Braun and Scott Borchetta have given since they announced the deal, neither would comment on Swift’s reaction — or the resulting drama. But Braun tells Billboard that the deal is just “the first move of many in building an ecosystem that allows artists to go after their dreams.”

Big Machine, which had been on and off the block for years, is a significant independent label that brings in over $100 million in annual revenue, with assets that include a roster of artists like Florida Georgia Line, Thomas Rhett, Sheryl Crow and Lady Antebellum, and Swift’s first six studio albums. At a time when major labels and other investors are bidding up the value of master recordings, given the potential of new markets like China and India, Swift is one of the few superstars who can command a truly global audience — and boost negotiating leverage with distribution partners accordingly.

Braun’s holding company — where Borchetta is now a minority stakeholder and board member — is already planning additional acquisitions through the rest of 2019. Since last year, Ithaca has launched a film studio with Marvel founding chairman David Maisel; acquired Atlas Publishing; and started a music-tech investment fund, led by former BMG president Zach Katz. It also has investments in other management firms, including Jason Owen’s Sandbox Entertainment (Kacey Musgraves) and Morris Higham Management (Kenny Chesney), and a partnership with Drake and his manager Adel “Future the Prince” Nur — relationships Braun leverages to get information, gain access to deals and win better terms.

Both Braun and Borchetta distribute their respective labels through Universal Music Group (Braun’s Schoolboy Records is a strategic partnership with UMG), and industry executives say the new company could use its clout — and its ownership of Swift’s catalog — to get better terms from it or other partners. (Both distribution deals are up within the next 18 months, sources say.)

Swift, who signed a new recording deal with UMG in 2018, could potentially block Braun and Borchetta from licensing her recordings for use in commercials, film or TV, since her publisher, Sony/ATV, gives her approval over the use of her compositions. But an industry executive says that would be unlikely because Swift is “very smart, and she’s not going to do anything that would hurt herself” financially.

As the deal closed, Braun and Borchetta spoke about their plans for their new company — and how they plan to maintain an independent spirit.

You’ve known each other for almost a decade. When did you start talking about this acquisition?

Borchetta: There was a conversation a few years back and it never really got off the ground, but it was fascinating to me even then. There were a lot of things we would throw back and forth — we ended up doing something together with Rascal Flatts and Justin Bieber — and then it got very serious last fall.

Scooter, you’ve been on quite a shopping spree lately. Why was Big Machine such an attractive asset?

Braun: Scott runs an incredible company, and we’re trying to build an artist-first environment and — in a climate with a lot of players — get the leverage we need to help our creators go after their dreams. By combining what Scott had with what we had, we feel like we’re in a unique position to fight the good fight.

Scott, you had been talking with potential buyers for Big Machine for years. Why did you hold out so long?

Borchetta: I never felt like it was exactly the right time or the right fit. I promised myself, and our artists and executives, it was going to be one of two things: Either I’m out — and I had no desire to be out — or I’m going to find an opportunity that is truly additive, that can give us more arms and legs and levers than we have now. [Until now] it never really felt like I could live up to that promise.

You founded and ran Big Machine as CEO, but you’ll now be reporting to Ithaca’s board. Is it difficult for you to give up some amount of control?

Borchetta: We have very specific agreements coming into this: Big Machine Label Group will continue to operate exactly as it has been. I’ve been fiercely independent — I choose to be fiercely independent — and Scooter is the same way. This is going to be a bigger company, but it’s not going to be a corporation; there are things we can do on a dime.

Wouldn’t institutional investors like Carlyle look skeptically at the idea of having two separate labels and two separate publishing companies?

Borchetta: There’s not a lot of overlap between our two companies. That’s why I believe Scooter was so attracted to the company — we have a lot of the things that were additive to what they’re doing at Ithaca.

Braun: We still control the company. … These companies are built on people making sacrifices for their families, and we value that. If Scott sold the company to someone else, then they would have done what usually happens, which is you take the catalogs, you strip it all down, people get laid off — and that’s not right, those people put us in this position.

How can an artist who’s with you for both a management contract and a recording deal know that they’re getting the best possible terms, given the conflict of interest involved in doing business with a company that combines both?

Borchetta: Everything about our business is now transparent, and artists, managers and lawyers know what the industry standards are. The artists that we’ve talked to — they say they love it because there’s such an upside to being able to talk with one “artist team” instead of feeling like there’s a wall between artist, label and management. We’re going to flip the idea that an artist can’t get the best deals from one mega-team on its head.

What are the first three steps you’re taking to combine your operations?

Borchetta: Something we talked about in our very first conversation was, “How can we take all of these wonderful artists and executives and cut a wider swath through the noise out there?” As we start building out, we’re going to completely re-create how we’re marketing our releases. Now that we’re in this digital space, how do we create those blockbuster weeks that we used to be able to do in a physical world? Just a few of the things we’ve touched on already are so exciting.

Borchetta: Then we’d be telling the competition what we’re doing.

Scott, you went toe-to-toe with the major labels in Nashville. Any lessons you can apply to pop?

Borchetta: Breaking country artists is still hand-to-hand — it’s very much relationship-driven — and there’s a big element of that we can introduce to some of [Braun’s] great artists that are on the verge of blowing up.

How are you going to integrate these two companies in practice? Are there cultural differences in terms of how they work?

Borchetta: Scooter gets away with wearing shorts in the office. I haven’t been able to pull that off.

Braun: When we made the announcement to Big Machine, we said, “We’re not going to be letting anybody go — we’re going to build it bigger.”

Borchetta: When I told everybody at our staff meeting, after I gave them some of the points — nothing changes operationally, etc. — I said, “Please welcome my new partner, Scooter Braun,” and you would have thought The Rolling Stones just walked in. They gave a standing ovation that went on for what felt like several minutes. He and I looked at each other like, “This is right.”