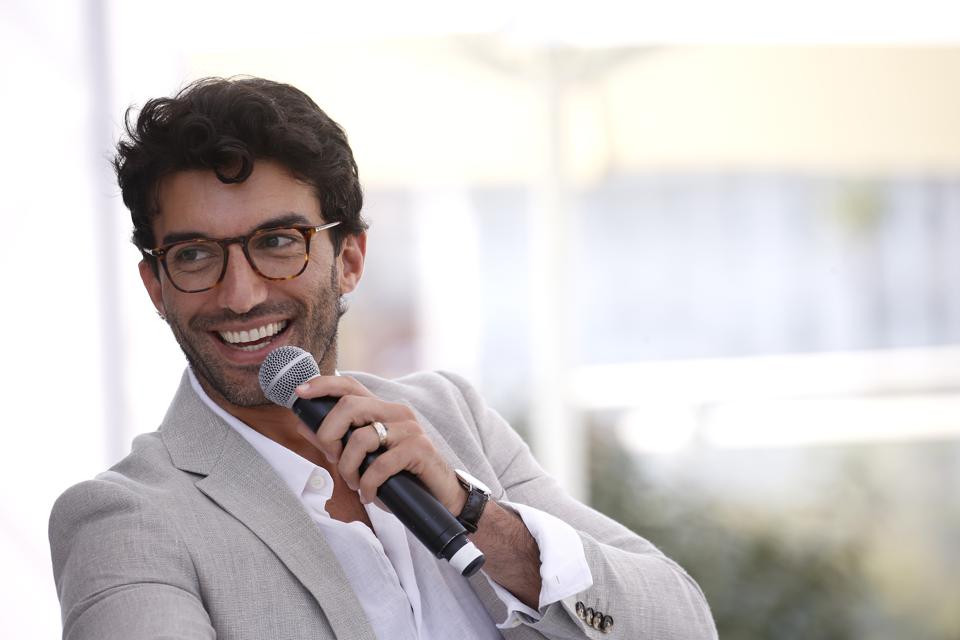 “I was scrolling through the video’s comments, and the thing that changed everything for me wasn’t the 14 million views; it was the person that said they were going to kill themselves before they watched it, and it made them decide not to,” explained Justin Baldoni.

“That is beyond powerful.”

The former actor turned producer and director was describing the moment he knew that refusing to be what Hollywood wanted him to be and instead focusing on creating life-affirming content was the right choice and was affecting real change.

The video he was referring to was about Zach Sobiech, one of the people he featured in his first documentary series, My Last Days.

“It was in season one and ran on a little online network called SoulPancake that one of my friends, Rainn Wilson, started. At the time, even they didn’t believe anybody would watch the show. I made that show for $4,200 per episode,” he recalled. “I quit acting and spent a year traveling the country, my house went into foreclosure, but I believed with all my heart that, at that time, I was supposed to tell these stories because people needed healing. Our final story was with a young man, a musician, Zach Sobiech.”

“The week that he passed, we’d stayed up for every night, pretty much all night long so that we could finish it in time for him to see it. It’s 20 minutes long, and SoulPancake usually only made things that were four to seven minutes long, so they were concerned. Even then, I’ve always believed that the story will dictate the length of content, not standard viewer retention time, and when we posted it, it defied all the odds.”

He added, “Upworthy posted it, and it crashed their website because it was so popular. That was a key moment that helped them refocus their business model towards sharing positive content. The video got 14 million views on YouTube in just a few weeks, seven or eight years ago. And then Zach’s song hit number one on iTunes that week, the week he died. I didn’t make any money off that project, I was losing everything, but I was happier than I’ve ever been.”

That was just the beginning for Baldoni and My Last Days.

“My goal over the last seven years was to model that and take it to television and then to the big screen,” the father of two enthused. “After I finished Jane the Virgin on The CW, I sold My Last Days to the network. They bought it as an internet series for CW Seed, but I believed it belonged on TV, so instead of 20-minute episodes, I gave them 40-minute episodes for the same price. Of course, we lost money making the show but, to his credit, when the network President, Mark Pedowitz, watched it, he said it had to be on TV, so they greenlit it for a three-night special. Four years later, we’re still making that show. Last year, it was honored by the Television Academy as one of the shows that are pushing television forward.”

The road to success did lead Baldoni to the big screen when he made his feature directorial debut with Five Feet Apart, which went on to gross $91.5 million at the box office.

“That movie was inspired by something I was told by Claire Wineland, who I featured on My Last Days. She had cystic fibrosis and was the person who told me that two people that have CF must stay five feet apart, and it gave me an idea,” he said. “Claire and I developed it, and we sold it to CBS Films because that was the only place I could get a meeting outside of Warner Bros. I told them it wouldn’t cost a lot of money, showed them what I’d been directing for the last ten years and asked them to trust me that people would watch it. They gave me $7 million to do it.”

“As their parent company owned the publisher Simon and Schuster, after we’d done the script, I suggested we turn it into a book. They said they didn’t do that. Again, I asked them to trust me, and it became a bestseller. The month before the movie came out, it was number one on the New York Times bestseller list and sold millions of copies.” 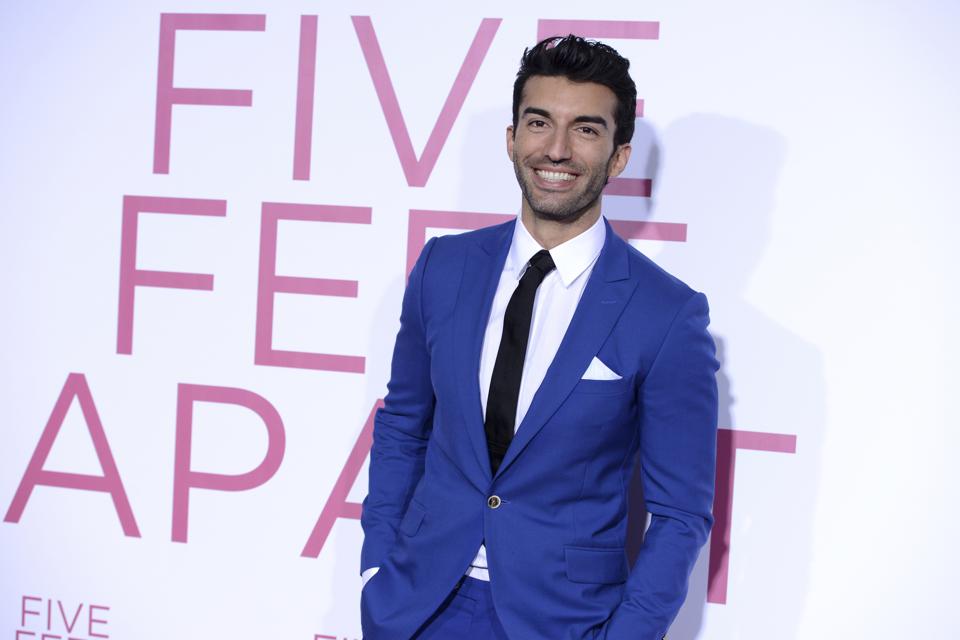 One of the reasons Baldoni recently launched his latest venture, Wayfarer Studios, was to develop stories that Hollywood continues to be unsure about. He thinks about the potential human value while the traditional studios think about the possible commercial value.

“It’s not just about me; it’s because I believe that direction I am pushing to go in is where we need to go. I’m willing to do everything and put myself on the line to prove it because the world is messed up,” the father mused. “When we have our deal memos going out, that goes through a process internally where we say, ‘If we were negotiating for two months, where would we end up? Let’s have an exercise where it’s painful for us for a second. Why do we need that extra point on the back end? Why wouldn’t we give them an extra $50,000 or whatever it is? Let’s talk about those things before we send it out.’ That’s when we send out the offer. We explain where we are at, why we’re sending it as it is, and we’ve already negotiated against ourselves. We want people to know that we value them as a partner; we want them as a part of our community. I believe that’s the future of our business, where creators want to be protected and know that the art wins.”

“Look at the shows and movies that people gravitate to in times like this. They’re not the tentpole movies that made the most money; they’re the movies and shows that have heart, are saying something or teaching something. It’s the movies that are telling true stories that are reminding people of how beautiful life is or how triumphant the human experience is. If people don’t take me seriously honestly, I can live with that because I believe the work speaks for itself, and the world is already demanding this content.”

However, people are taking him seriously. Having already worked with Warner Bros. Lionsgate and CBS Films, Baldoni recently agreed to a deal with Disney to release Clouds, a movie about the life Zach Sobiech, on Disney+ this fall. The director got the project greenlit while he was still acting on Jane the Virgin.

“Zach changed my life, both personally and professionally. As Zach said, ‘You don’t have to find out you are dying to start living.’ Cloudsinvites us to joy through the experience of grief; to live through the lens of death.”

“We were also fortunate to have an amazing and supportive partner in Warner Bros who were just as excited and passionate about finding the right home for the film once we decided that a theatrical release was no longer in the cards due to COVID-19. Disney was the obvious choice for me and my new company, Wayfarer Studios. Zach is a massive Disney fan himself and would be so happy to see where his story ended up.”

He added, “Clouds is a story about living,” he enthused. “Hollywood always tries to put films and ideas in boxes, but this film isn’t just about a kid who is dying, it’s not a ‘sick kid’ movie.”

One thing Baldoni wants to avoid is boxes – something he’s no stranger to.

“You’re talking to somebody who has, for his entire life, had imposter syndrome and dealt with a lot of insecurities. I will always err on the side of thinking nobody takes me seriously. That’s my internal struggle. But at the same time, I’m fuelled by No,” he enthused. “My entire life I’ve been underestimated and put in a box because of the way I look or how I’ve been portrayed on TV. Generally, I’m somebody that’s on TV, and his shirt is off. What does that say?”

“There’s a reason why I don’t pose with shirtless pictures on my social media. I’ve built my brand and content around things that come from the heart, my mind, and not my appearance. I’ve been fighting my whole life to break out of the box of the way I look. So, yes, of course, I didn’t think people took me seriously to begin with, but that’s the fire, that’s the fuel that has kept me burning the midnight oil every night for the last 15 years because I do feel like I have something to prove.”

And while the coronavirus has had a considerable impact on the film industry, including his own projects, Baldoni sees this as another opportunity for change in Hollywood.

“This is a chance for us to rebuild Hollywood,” he urged. “Like everybody else in the industry, I have this hustle mentality, but it’s allowed me to stay home with my family, and that’s rare. However, in the background, there’s still this fear that what I’m doing isn’t enough, and I should be creating five other things while I’m creating one thing.”

“Aside from putting people in boxes, Hollywood has a short term memory problem, and you’re only as good as your last project, but I think the industry has got that backward. I believe our studio is the antidote to that problem. I wanted to build a studio that’s artist-driven and artist-focused. We want to be synonymous with content for purpose, but that doesn’t have to be just earnest, vanilla stuff. Because I’ve been on the other side for so long, and I’ve been screwed massively, I know what it feels like to work so hard for something, to want to bring something to life and not have any ownership of it.”

The filmmaker concluded, “At Wayfarer, we want to change that. We don’t want to be lip service; we want to be of service and have true alignment with our partners, our collaborators, our friends and work together to bring a common vision to this business. People often say that this is show business and not show friends, but we believe that you can have friendship and business. It seems like as an industry; we have forgotten the reason why we are all in this in the first place. It’s to touch people’s hearts. There’s no reason why you cannot make a lot of money by touching people’s hearts, and they are not mutually exclusive. That’s what I’ve been trying to do for 15 years. I’m so grateful to finally be in a place where I’m being taken semi-seriously.”

This article originally appeared on Forbes.com.