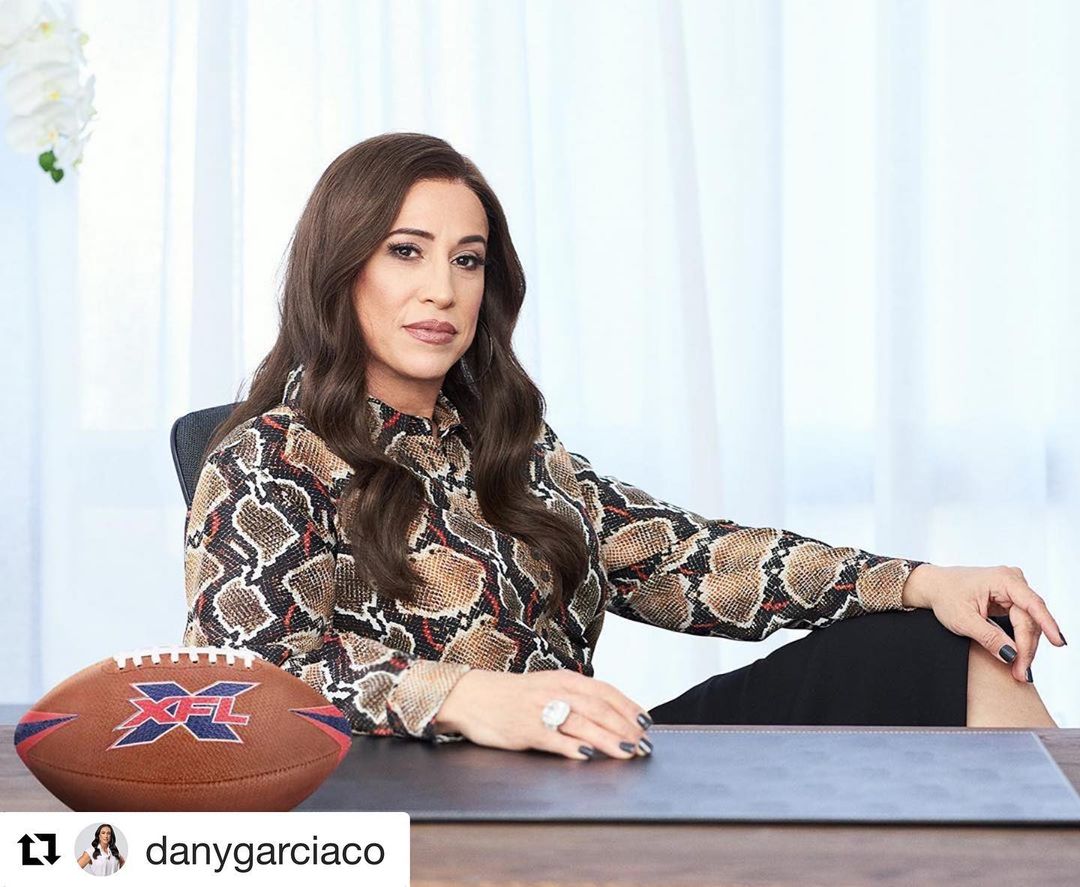 Dany Garcia Talks XFL Purchase, Challenges Ahead, Being the First Woman to Own Stake in a Pro Sports League

Dany Garcia speaks to SI about being part of the group that purchased XFL, whether or not The Rock needed convincing, whether she sees the league as a competitor to the NFL and more.
by Dan Gartland

Dwayne “The Rock” Johnson may have garnered the bulk of the headlines when his group purchased the XFL on Monday ahead of a scheduled bankruptcy auction but his ex-wife and longtime business partner Dany Garcia was the one who presented him with the idea to purchase the shuttered football league. Together, Johnson, Garcia and the private equity firm RedBird Capital purchased the league for $15 million..

Garcia, a former Merrill Lynch Associate Vice President, and Johnson were married from 1997 to 2007. In 2008, she became his business manager and the pair have worked together on a variety of projects, including producing many of Johnson’s blockbuster films.

Through her own investment firm, The Garcia Companies, Garcia is involved in a variety of business, ranging from Garcia and Johnson’s Seven Bucks Productions to the fast-casual Mediterranean restaurant chain Cava.

Garcia spoke with Sports Illustrated Monday, shortly after her purchase of the XFL was announced to discuss the new ownership’s plans for the league.

This must be an exciting day for you.

It is. It’s an exciting day. I found out yesterday that the auction was going to be canceled and that was the beginning of just incredible emotion and I’m enjoying today.

How did the XFL come up on your radar?

The first iteration of the XFL I was very familiar with because Dwayne and I were still married at that time and he was wrestling, so we were tracking it along with Vince [McMahon]. First of all, I’m a huge football fan. Dwayne is a huge football fan. I’m a professional bodybuilder. Sports are a part of who we are, and the storytelling around it is just part of our ethos. So when Vince relaunched the XFL this year, I was extremely excited. I actually was an avid fan right from the beginning. I ordered a ridiculous amount of merchandise. I decided I would have numerous teams that I would support. I was also envious. I wished we had been in that conversation right at the beginning. Unfortunately, obviously what happened with COVID and live events led to this moment.

So the XFL, I had been tracking for some time. In May, I called Dwayne and I said, “We have something really big and very, very important to do. Would you like to do this with me?” And that started it all.

Did he need any convincing?

No. Not at all. It’s kind of a cheat, because we are so like-minded. Usually when I call him and I’m like, “Hey, I have this idea” he’s like “Is the idea this?” and I’ll say, “It is.” We both knew it was an incredible opportunity and we also knew it was an opportunity to do something with someone [McMahon] who had such an impact in our lives when we were very, very young and continues to. I see it as sort of a handing of the torch.

Was there something in particular that got you excited about pursuing the opportunity to buy the XFL?

Absolutely. There were so many things. I was so impressed with the quality of play. I was very impressed with the production of the product. I loved the new rules. I thought the XFL did a wonderful job of breaking the barrier between the athlete and fan and allowing you to have that real sense of ownership. They were beginning to tap into that intangible phase, the phase where magic can happen. With these athletes in particular, in addition to having some incredible standouts, which was wonderful to see them move on to the NFL, you could see the passion of the game, the passion of this opportunity.

You’ve invested in a lot of different businesses and I’m wondering, when you decide to invest in a company, what sort of opportunities appeal to you?

The other thing I’m always looking for is, is it an opportunity where I can actually have an impact on the type of storytelling and the quality of the experience? I’m very much interested in architecting moments with a consumer, or a fan, or a viewer that are unique and special. Impacting the individual on the other side of the transaction or experience is very important. The people I work with are very important. I’m looking for projects that are sound, sustainable, are surrounded by people who want to do good, who are looking for diversity and inclusion. That’s extremely important. And I’m looking for projects that move the needle, that make an impact—and the XFL does absolutely that.

You’re involved in a very diverse set of businesses. What are some of the challenges of working with such a wide range of companies?

It depends on your point of view. It can from the outside look like they’re really diverse and maybe not connected. But if you go up 50,000 feet, you’re going to see that they have similar processes and they’re very similar in what they’re trying to accomplish. I mentioned that they’re all consumer-facing.

When I’m looking at the portfolio or I’m investing or inquiring or building, all of these companies actually do have synergy and they actually work and complement each other. I’m not heading north and then all of a sudden heading west. I might go a little northwest but I really try to stay in my lane, so a lot of these companies on the surface may look different but really, when you begin to break them down, they follow a lot of my philosophies, they actually follow where I believe the consumer is going, where I believe the audience wants to be, and they fill in those gaps. So from my point of view, they actually work quite nicely together, but I guess that’s part of my secret sauce.

I guess the outside observer might see the XFL as quite different from many of the other things you’re involved in but you’re saying there are a lot of similarities there.

Absolutely. When Dwayne and I speak about this, we say that this is an opportunity that we’ve been working towards all of our lives. We’ve dealt with live audiences from the beginning. We’re athletes. We’re avid, passionate storytellers. We have digital experience. We know consumer products. When you look at our skill set, you can see that it ties in perfectly to what the XFL needs, which is a combination of high EQ and high IQ.

Obviously, it’s a difficult business and it needs expertise and it needs incredible passion and creativity and commitment. When you begin to look at what we’ve done, there’s a line to the XFL.

What do you think is the biggest challenge you’re facing with the XFL?

Of course the biggest challenge is going to be COVID, which is kind of obvious. The other challenge that we have, which is actually an opportunity, is making sure that the quality of football continues to stay there but also building the relationship between the viewer and what they’re seeing—not just from a macro point of view, making these incredible athletes important to them, making them understand where they actually came from.

We may have a bit more turnover and that’s not a bad thing that we have turnover as our athletes move on. Our goal is to have them stay with us because the experience is so incredible and our brand continues to grow. Making sure that the brand is connecting culturally, I think that while that’s a challenge it’s also an opportunity for us. You’ve got two owners of color. You’ve got a woman as an owner. We have an incredible partner in Gerry Cardinale who’s deeply experienced in sports. We’ve got this incredible person that is not only used to speaking to what the consumers and the audience wants now but very attentive to what culture is today and how it should be represented in the XFL and how the XFL should be a part of it. Those are great opportunities and opportunities come because they’re great challenges. But we’re comfortable with that.

You mentioned being a female owner. You’re the first woman to own a stake in an entire sports league. How important is that to you?

It’s incredible. I wish I was the 20th. That would be wonderful. But the fact that I’m the first, it’s one of those things where you have to sit back and think about it for a moment, think about the enormity. A lot of times, I’m putting my head down and moving forward to do what I think is the best thing possible to make an impact. But moments like this, you need to stop and say, “Oh my gosh.” I’m in a milestone moment. I feel so fortunate because not only am I in a milestone moment, I’m in a milestone moment when media is very important and social conversations are really, really important now. So this moment can be a moment for so many people. I think that is very, very important and I’m honored to be in this position.

Has sports ownership been a goal of yours?

It has. It has for the last couple of years. A lot of my work, too, is geared toward specific individuals, so I know how to take care of people. I know how to take care of athletes who really strive, who are successful and talented. There’s this enterprise opportunity that exists with the XFL but more importantly, there’s this human opportunity. For me, that’s been a huge part of my practice, a huge part of the businesses that I’ve built. Now I get to put that toward these athletes, toward our partners and get it holistically, to see not only the beauty of the game but how they’re living and the impact we have. It’s a really, really important role. I’m very excited for that opportunity.

I don’t know how much you follow wrestling but speaking with you reminded me of a lot of the conversations around AEW, the new wrestling company founded by the Khan family. AEW likes to say it’s not a competitor to WWE, it’s an alternative. Is that how you’re approaching the XFL?

That’s a great question. I don’t know if I want to make that decision whether we’re an alternative or a competitor. If we were going at the same time and we were fighting for the same ad space, well then we’re competitors. But football is a massive landscape, so I think there’s plenty of room. I’m sure I love the word alternative but I can see the value in that space because it’s not competitive, so I respect that.

What does the future hold for the XFL?

Expansion. Expansion and more storytelling. Storytelling that lives in a 365-day way, we’re talking 24/7. Those five weeks that the league had made an impact. Engagement was incredible on social media. The TV ratings spiked and then they settled where they should have and then they were really starting to get entrenched and they had wonderful attendance. That engagement is an opportunity for that to happen all year round even though that live aspect will be in a specific period of time. I think that’s an incredible thing. I think it would be an incredible thing to see even more teams added. There’s a lot out there.

This article originally appeared on SI.com.