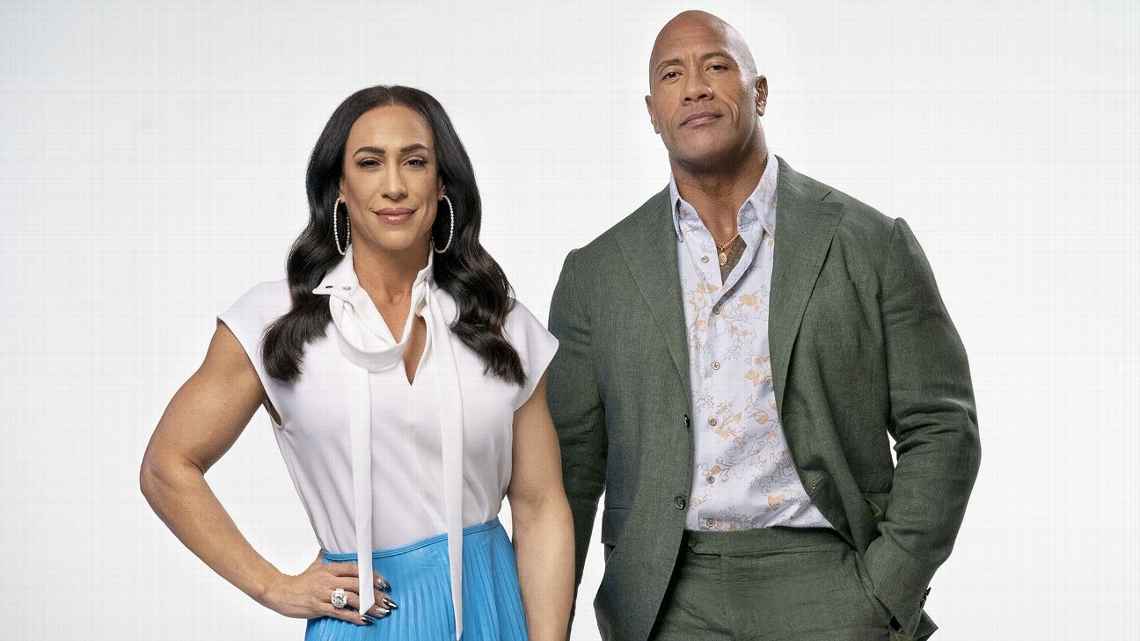 Dany Garcia was captivated the moment the XFL 2.0 kicked off in February. She was surprised by the level of play, appreciative of the attempts to speed up the pace and intrigued by the potential for expanding storylines and providing new access to players and coaches. So when the league entered Chapter 11 bankruptcy in April, she immediately picked up the phone and called her ex-husband and longtime business partner: actor Dwayne Johnson, aka The Rock.

“I told DJ, ‘We have something really important to do,'” Garcia recalled by phone Monday. “‘We want to do this.’ It was so natural. There was a moment in Dwayne’s life when football was going to be his [career]. I’m a professional athlete myself. We do sports. We do entertainment. If you look at our résumés, everything points to this moment and opportunity for us, to work with these athletes and to build this brand.”

Garcia and Johnson teamed with Gerry Cardinale, founder and managing partner of RedBird Capital Partners, to submit a bid worth $15 million, plus additional considerations, for the league. According to court documents, they submitted the only qualified bid. Assuming a bankruptcy judge approves it during a Thursday hearing, Garcia will take over as the first woman to own an equal or majority ownership stake in a major professional sports league in the United States.

The agreement ensures a future for the brand but leaves plenty of questions regarding the timing and scale of football it will produce. After a day of reporting, let’s run through what we do and don’t know about XFL 3.0.

Who is going to run the league?

Garcia said she will hold “some kind of executive position with the organization.” But she also noted a long list of other professional commitments, which include television and movie production. She is also a professional bodybuilder. Johnson will soon return to filming movies, while Cardinale and RedBird supervise more than $4 billion in assets. Not a lot of free time to go around there.

Garcia said she expected all three to be “heavily involved” but also provided a strong endorsement for the executive team that former owner Vince McMahon built. That group was led by president and chief operating officer Jeffrey Pollack, who was among a handful of XFL employees who were not laid off during bankruptcy. Former commissioner Oliver Luck, who is suing McMahon for wrongful termination, is unlikely to return.

It’s worth noting, however, that McMahon’s decision to hire Luck — a former NFL quarterback and longtime sports administrator — was the first signal that he wanted to produce serious football. The identity of the league’s day-to-day leader, whether it is Pollack or a new hire, will be a powerful message about the new owners’ intent.

Why haven’t we heard from Johnson?

We have, in a way. In a rousing statement, he said he got involved because of “my passion for the game and my desire to always take care of the fans.” He added: “With pride and gratitude for all that I’ve built with my own two hands, I plan to apply these callouses to the XFL, and look forward to creating something special for the players, fans, and everyone involved for the love of football.”

Johnson played college football at the University of Miami before joining the WWE and later moving into acting. But Garcia spoke Monday for the ownership group, emphasizing a “milestone that will be of importance to so many people.”

How will the league benefit from having a woman in ownership?

Garcia said that diversity and inclusion will be “a relevant and accountable conversation” throughout the league. In truth, she noted, the XFL was on its way to building a strong record in this space. Two of its eight team presidents were women, and each officiating crew included at least one woman. Three of its eight head coaches were Black.

“Our expectation is that we will just continue that and continue that with intent,” Garcia said. “We will have the best people in the best positions, and it will be diverse and inclusive and that’s how it should be.”

Will the league have the same core principles on the field?

Garcia suggested that it would.

McMahon introduced the XFL 2.0 as an attempt to “re-imagine” football, and it introduced nearly two dozen tweaks to the conventional game. Most notable was a new kickoff alignment that all but guaranteed returns, along with three options for point after touchdown attempts. The league also guaranteed broadcasters an enhanced level of access to players and coaches during games, while also allowing viewers to listen to officiating deliberations in real time. In addition, it embraced gambling on its broadcasts and its creative social media platforms.

“I think there was a lot to build on,” Garcia said, “and not so much a matter of changing it. Any format change would be because of COVID-19. That would be the reason. The roots and the bones of what were there were excellent. I like the speed of play. I loved the access. I think there is probably some elegance that can be added so that maybe it’s not as disruptive. But being in the box when they’re reviewing the calls, and reviewing the penalties? Those were moments when you really felt that you were with and knew the players. So that was amazing to bond with that football experience. There was a lot of great, great work. It’s the opportunity to say, ‘OK, that was fantastic. How do we make it 10 times better?’

“We’ve grown a tremendous amount of companies from the ground up. This is a space where we’re very, very comfortable. We can really put our touch on it.”

Can the league really pull off a season in 2021?

It will be difficult. Garcia said there are active conversations about what a 2021 season would look like, and she noted the success of bubble concepts in the NBA and WNBA, among other leagues. The XFL had built a bubble plan for its eight teams, to be used either in the pandemic or as a cost-cutting measure, and it is part of the intellectual property that would transfer to new owners. In that scenario, the teams would practice and play in a single city, probably without fans.

“The audience is getting used to watching these games without fans,” Garcia said, “and that’s super, super, super important, too.”

There are some potential positives for playing spring football, most notably a potential influx of talent if college players opt out of the 2020 season or it is canceled altogether. Those players could instead participate in the XFL and then enter the 2021 NFL draft. (Former West Virginia safety Kenny Robinsonfollowed that route last spring, playing for the XFL’s St. Louis BattleHawks and then heading to the NFL’s Carolina Panthers as a fifth-round draft choice.)

But the pandemic could create a “crowded marketplace” this spring, said David Carter, a leading sports industry analyst, principal of The Sports Business Group and an associate professor of sports business at USC. And the challenge of scaling up the league after it was stripped to the studs is considerable. Nearly 1,000 former employees, including players, remain creditors in bankruptcy, as do hundreds of vendors who provided the league services, and they are unlikely to receive more than a portion of money they are owed.

Don’t they want jobs, though?

Of course. One former staffer estimated Monday that less than 10% of the league’s workforce has found long-term employment. But many were also angered by a quote attributed to Pollack in a news release that heralded a “Hollywood ending to our sale process.” Suffice it to say, Monday wasn’t a “Hollywood ending” for everyone.

What should be made of the $15 million purchase price?

Many former employees were surprised at how low it was. The sale was brokered by Houlihan Lokey, a well-known firm that said it had received more than two dozen inquiries serious enough to merit non-disclosure agreements to accommodate a review of assets.

But the only qualified bid came from Garcia, Johnson and Cardinale, and it was lower than the gross revenues (nearly $20 million) that the XFL claimed for its five-game season. In court filings, McMahon said he had invested $200 million in startup costs.

The purchase also makes the new owners responsible for payment of cure amounts up to $8.5 million. Ultimately, though, the price represented what turned out to be minimal interest in buying the brand. PJT Partners served as financial adviser for Garcia and Johnson in the deal.

Are we sure that McMahon didn’t just cut a deal with his friends?

McMahon admitted in a court deposition that he had given thought to retaining ownership through the bankruptcy process but decided against it when the unsecured creditors committee accused him of rigging the sale.

Johnson, of course, was a longtime employee of McMahon at WWE. Garcia was married to Johnson during part of that time and has managed his business career throughout. She said Monday that she was involved in Johnson’s WWE contract negotiations and storylines and knew McMahon and his wife, Linda, “very well” during that time.

It’s only human nature to ask whether, in a world of 7.8 billion people, it’s entirely coincidental that two of the new XFL owners are longtime associates of the previous one. Many former XFL employees were among those asking that same question.

Meanwhile, as attorney Daniel Wallach noted, the unsecured creditors committee filed an objection to the sale based in part on sale terms that might not have maximized the value of the league. The committee, in fact, expressed concern about the connections between McMahon, Johnson and Garcia.

If your conspiracy theory is that McMahon is trying to run the league through longtime associates, the committee offered this ominous but vague footnote in its filing: “While the Committee has no evidence to support that the Proposed Buyer is affiliated with McMahon or the WWE (other than certain well-known affiliations between a member of the Proposed Buyer and McMahon/WWE), the Proposed Buyer’s insistence that the Sale include the acquisition of insider claims raises significant concerns and questions about the connections or intentions of the Proposed Buyer vis-à-vis McMahon and the WWE.”

These concerns presumably will be adjudicated during Thursday’s approval hearing.

This remains the elusive question for spring football. There hasn’t been a successful alternative to the NFL in 50 years, largely because no one has figured out how to make it profitable.

Broadcast fees are the lifeblood of successful major sports leagues, but they take time to earn. The XFL’s 2.0 plan called for three seasons of investment and proof of concept before that point would come. Its 2020 television deals with Fox and Disney (ABC/ESPN) covered only production costs.

A 2021 bubble concept would eliminate all the costs associated with placing teams in multiple cities, as well as much of the local revenue. It also would reduce the number of players the league would need to sign for training camps, a substantial savings. But the XFL 3.0 likely will need to secure broadcast fees on some level to ensure long-term success.

This article originally appeared on ESPN.com.